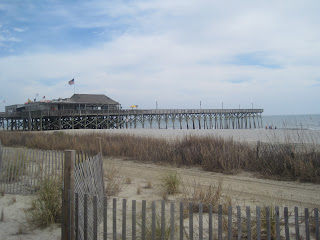 I ran the Myrtle Beach Marathon this past weekend and the weather was beautiful! It was 55 degrees at the start. When I arrived, I took a taxi to my hotel and the driver was hilarious.  He had such a deep southern accent and had so much to talk to me about.  I listened a lot.  He was talking about high taxes, Harley Davidson bike week, and retired folks.
I went to the marathon expo that night and met Logan Hejl who is a local runner and a member of the Grand Strand Running Club. I also met Logan's wife and daughter who are new runners!  At the packet pick-up area, I met two elderly men that were volunteering, and they were both from Maine! One was from Berwick and the other was from Sanford.  The one from Berwick told me he would be at mile 11 on the marathon course volunteering and sure enough I did end up finding him for a picture during the race.
I woke up at 4am and put on my 50 for Billy shirt and began walking to the start.  It was a beautiful morning and there was a full moon! At the start line, "Sweet Caroline" was being played and I really wanted to start singing and dancing.  Hearing that song made me think of Red Sox games with my dad and cousin Michala.  We would always have a blast singing "Sweet Caroline."
I talked to several runners at the start, including first time marathoners and Marathon Maniacs and 50 Staters.  My favorite newbie was a lady named Kathy who was with her husband, they were from Nebraska but now residing in Myrtle Beach.  It was her first marathon and she was nervous.  However, Kathy just ran 20 miles on the beach with weights a few days before the marathon. Clearly, she had nothing to be worried about.  I ended up seeing Kathy at the end of the marathon and she was ecstatic.  She was with her family and ready to hit up Margaritaville! It's always a joy to see first time marathoners make it to the finish line.
I also met Bill, a 50 stater who had ran 72 marathons.  He saw my 50 for Billy shirt and talked to me for a few minutes before the start and told me, "Pain is expected, injury is optional." I love his motto.
During the marathon, I met Larry Macon who is a Guinness World Record holder. In 2008, Macon ran 105 races of 26.2 miles or more—the most anyone has ever run in a year.  He is amazing and so personable.  I talked to him for about 10 minutes or so.  I asked him what number Myrtle Beach was for him.  He told me it was his 721st marathon...jaw dropper.  He kept telling me that I was an inspiration for what I was doing, but really Larry, you are the true inspiration.  Larry is running several marathons and ultras this year including the Great Cranberry Island Ultra Marathon in July.
Around mile 16, I wasn't really feeling so great...I was so dehydrated.  I thought I had enough liquids in my system, but apparently not.  I talked to a lady named Ann, from Modesto, CA and she was very sweet.  It was also her 5th marathon.  She ran Philly too in November and had a PR with a time of 4:28.  We ended up running together for a majority of the second half.  She definitely made the time go by faster and was fun to talk to/run with.  Hopefully our paths will cross again at another marathon as she wants to complete all 50 states too!
And last, but not least, I really enjoyed meeting my Twitter/Facebook running friend Logan who is from SC.  He ran a 3:09 (BQ) and was so friendly! His wife and daughter were both very nice too! He has inspired his family to run races now.  He waited at the finish line with his wife for me to come in which was so sweet! It was great to see them there and to find out how Logan's race went.  Hopefully, Logan will come to Boston in a few years to tackle 26.2!! When he does, I will be there cheering him on!
After the marathon, I realized I had sprained my ankle somehow and also had a huge blister on the inside of my foot. I still ended up running the day after the marathon on the beach for 3 miles and it felt great! Battle wounds are always worth it.  I really took my time during this marathon and talked to other runners, which was enjoyable.  I love inspiring other people to keep running and to run for someone or something.  The marathon to me is a journey and one big party to remember my dad.  He would be happy that I am doing this to stay healthy and to enjoy myself.  I asked my brother Bobby what dad would have thought of 50 for Billy and he said, "Dad would have thought it was really awesome." I am sure he is thinking it is a great way to remember him and to benefit others.
Before I left for SC, Joey Cresta from the American Journal wrote an article about 50 for Billy.  Here's the link to the article: http://www.keepmecurrent.com/american_journal/news/article_b975d7b4-3a28-11e0-97c1-001cc4c002e0.html
Also a few weeks before the marathon, I did a phone interview with Lauren from the Center for Grieving Children in Portland, ME.  Lauren is a graduate student at Boston College and is currently interning at the Center for Grieving Children.  We had a great conversation over the phone and she will be writing an article in the Center's newsletter about 50 for Billy.  I hope to meet Lauren at one of the Center's events in the near future.
45 more states to go!! I am heading off to VA Beach for the Shamrock Marathon in March.  Thanks again everyone for your continued love and support.
Posted by Elizabeth at 3:19 PM