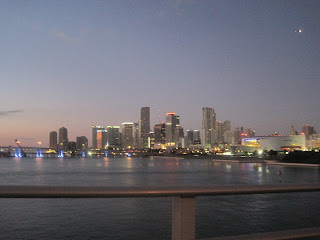 "Every setback is a setup for a comeback." This describes my experience with Florida.  I was unable to run Disney due to being sick, but then came back to tackle Miami even while on antibiotics.

This was my first marathon experience on my own.  I was anxious and nervous at first, but it was very liberating to travel by myself and to meet other runners.  I arrived in MIA a few days before the marathon and went out for a 6 mile run.  The weather was beautiful the whole time I was there.  I hung out at South Beach the day before the race and drank lots of H2O! 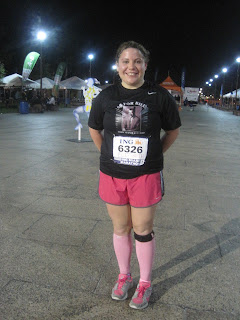 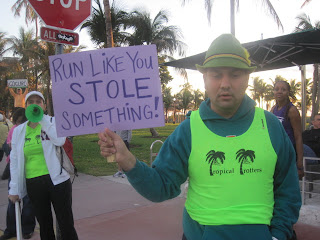 On the morning of the race, I woke up at 3am to get a shuttle at 4am.  The shuttle was about 2 miles away from where I was staying.  It was so funny because as I was walking down Washington Ave in Miami Beach everyone was out clubbing and drinking.  The bars and clubs stay open until 5am.  I was hit on by some random guy...he said, "hey mami, where you going??" I didn't say anything because it was completely obvious where I was going with running clothes and my bib # on.

The shuttle bus ride was quick to the start area in downtown Miami.  The start was at the American Airlines Arena where the Miami Heat play.  I didn't sleep well the night before, probably slept for only 3 hours.  I was a bit emotional in the morning, the weather felt the same way it did the day my dad died.  Once I got into my corral and talked to other runners, I felt a lot better.  I talked to a local running group in my corral, most of them were first time marathoners...awesome!! I met a commerical litigation attorney named Melissa who was from Miami.  It was her first marathon and she was so sweet.  I told her about my journey and gave her a 50 for Billy magnet. 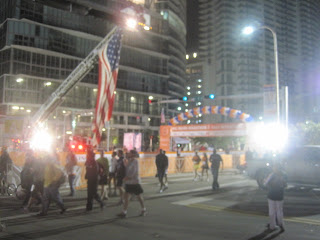 The race started at 6:15am and runners ran under a huge United States flag that was at the World Trade Center after 9/11.   The beginning of the race was absolutely beautiful.  All of downtown Miami was lit up and the sunrise was gorgeous. The course itself was very beautiful, and very flat.  The weather was great until about 10am.  The heat was really on and the humidity was high.  I had covered myself early in the morning with sunblock, but it didn't do much for me.

Around mile 17, a man running his first marathon with a shirt on that said "WHAT WALL?" ran to catch up with me and he said, "You didn't know this until now, but you're my motivation.  I just read your shirt and your dad is proud."  I talked to him for about 5 minutes and he said he has two more marathons planned--Kentucky Derby and Marine Corps Marathon (with his son)! He asked me, "Is the marathon worth it in the end?" and I told him "Yes, it's the best feeling in the world." I started to pick up the pace again because he got me pumped up.  He stopped and walked and said, "go get em." I wished him the best of luck and told him he could do it!

The next runner I met was a Marathon Maniac Diva, Bonnie.  I ran with her for a few minutes and talked to her about races.  She is doing the Gaspiralla Ultra Marathon in Tampa in February.

During the race, I heard a group of ladies talking about how boring it would be to run a marathon alone.  I thought to myself, it's not boring at all.  It's actually quite self-reflecting and liberating. 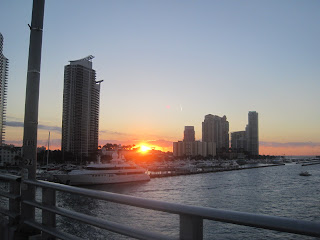 As I reached the last few miles, which were scorching hot and over a sunshine exposed bridge, I thought of my dad.  I wished he could have been in Miami with me.  I cried a little and then called my mom and said "I am at mile 24!"  I finished strong with a kick at the end.  I clearly do not know how to race a marathon. I am an endurance athlete, there's no question, but I am not a racer. I am not concerned about where I finish, I just want to have fun and talk to other runners.  I did exactly that.  I inspired a few others out there and that was my main goal.   That will continue to be my goal.

Miami taught me more about myself.  I can be alone for a weekend far away from family and friends and still have a fun time.  I can rock out 26.2 miles solo and still laugh and cry at the end.  I can talk to my dad and know he is listening and smiling down on me.  I can finish a race and enjoy it for the sake of running, for the feeling of being alive. 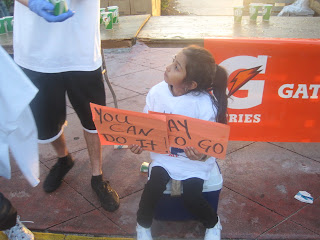 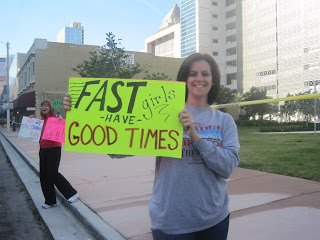 Posted by Elizabeth at 8:18 AM