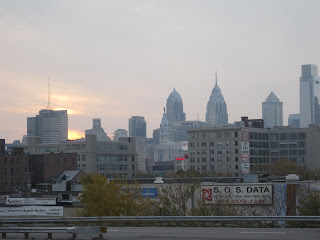 Here I am at 5:30am ready to go!! My twin brother Bobby woke up while I was getting ready so he snapped this picture! I was so excited to hit the road and begin another journey.

To start, I flew in from Boston on my own and took the Liberty Shuttle to my hotel Windsor Suites on Benjamin Franklin Pkwy.  On the shuttle, a lady from Houston, TX was talking to me and asked why I was in Philly.  I told her that I was running the marathon and she got all excited.  She said she had done 1/2 marathons and that her siblings do full marathons.  She was very sweet and I asked her about the Austin Marathon.  She told me that it is challenging, but beautiful.  I asked her if she had ever been to Maine and she had been to Bar Harbor/Mount Desert Island where my dad grew up!!

I arrived to the hotel and then walked to the expo to get my race packet & bib.  The expo was AMAZING.  It was huge and I was extremely impressed with how well organized it was.  Bart Yasso was at the Runner's World booth and he was selling copies of his book "My Life on The Run."  I had him autograph a copy and also snatched a picture of him and Mayor Nutter as the media came by when Bart was signing my book! 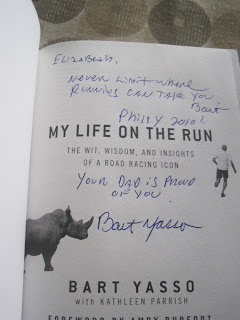 Bart was very personable and sincere.  I told him about my goal to run 50 marathons in 50 states in memory of my dad and he said, "you will do it."  My brother arrived to Philly from NYC a few hours after I got into the city.  The next day, we went out for lunch with a group of Twitter runners! @ericasara organized an awesome lunch at Marathon Grill.  It was great to meet a bunch wonderful runners and to later see them on the course!!!  Thanks @gksarahj5 for convincing me to go to lunch and for being at mile 14!! Then my brother Bobby and I adventured to Independence Hall, Liberty Bell, National Constitution Center, and of course we went to the Museum of Art and ran up the Rocky steps.  We ran up them while listening to "Gonna Fly Now"---the Rocky theme song!! The Rocky song is also played at the start of the marathon and at the finish. 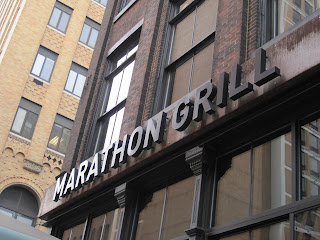 Now onto the marathon, the course was absolutely beautiful with only a couple of hills. At the start, Mayor Nutter and Bart Yasso were cheering on fans.  The Mayor was even giving high fives to runners at the end! I felt great during the whole race and did not hit "the wall."  I think the Zensa pink compression socks saved my legs!! The race was very well organized and the volunteers were GREAT!  There were spectators all along the course and lots of music.  I loved mile 7 at Drexel University, where fraternity and sorority members were drinking and blasting "Teach Me How To Dougie."  Every marathon has a theme song and that was it!! Chicago '09 was "I Gotta Feeling" by Black Eyed Peas.  The bib numbers have your names on them which was great because people were yelling my name the whole entire race. 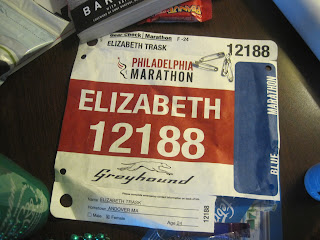 The first few miles went by Christ Church, the Delaware River, Independence Hall, Liberty Bell, City Hall, Drexel University, and the Philly Zoo.  The marathon goes along Kelly Drive which is along the Schuykill River...so pretty!! Boathouse Row was especially beautiful.  I loved Manayunk at mile 20, it was packed and there were tons of cheering and music.  I felt great at mile 20 and did not have any pain.  There were cheerleaders at mile 24 which was awesome!! I was running with a girl Kelly that I had just started to talk to, she is from the Philly area, but now lives in Colorado Springs.  She told me that she lost her dad at age 16.  I really enjoyed talking to her and ended up finishing the race with her. The picture above is of Kelly and I after finishing. 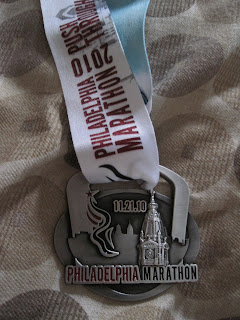 I highly recommend the Philly Marathon.  The medal at the end is so rewarding and the people of Philly were awesome spectators! Thank you to my New Jersey cousins for coming to the marathon and having lunch with Bobby and I, it was a blast.

I felt great at the end and still do feel pretty darn good for running 26.2 miles.  Thank you everyone for all of your support and good luck wishes & congratulations.  Congrats to everyone that ran this past weekend.  It was a pleasure to meet you all and keep up the running.  Now it's onto the Disney Marathon in January!! DREAM BIG!

Posted by Elizabeth at 9:55 AM