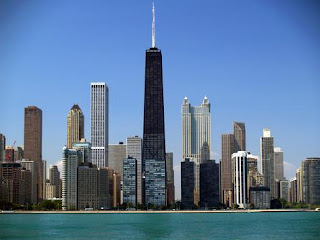 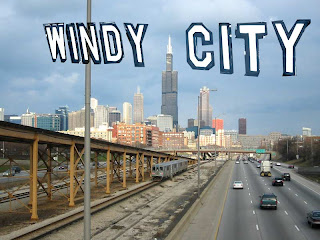 Chicago is such an amazing city.  My mom and two aunts, Cindy and Judy, came along for the adventure.  We explored the whole city a few days before the marathon.  There was so much stuff to do.  We took a double decker bus to the Navy Pier which was my favorite spot.
The weather was absolutely freezing the whole time we were there, especially being right near Lake Michigan.  The forecast for the marathon was a chance of snow showers and the temperature was around 30 degrees with a very crazy cold wind chill.  I had to buy spandex at Dick's Sporting Goods because I was not prepared for it to be so cold.  There were 65,000 runners, the ultimate thrill for someone who loves running.  It was so amazing.  At the start, I talked to a medical student from the Chicago Medical School.  It was her very first marathon and she was very nervous, but extremely excited.  Her family couldn't be at the race, because they all lived in India, but she was telling me how she uses Skype to keep in touch with them.  I gave her some good luck wishes and told her to enjoy the ride.  Then we were off! It took 23 minutes to get across the start line because there were so many runners.  Sweats were being thrown up in the air and music was blasted.  Spectators were everywhere.  The course was awesome.  It was flat and went through the most popular Chi-town spots: Magnificent Mile, Greektown, Little Italy, and Chinatown.  The fans were fabulous, there were different groups of spectators at every mile marker...high school cheerleaders and bands.  The first 7 miles went by so quickly and I felt great.  The enthusiasm of everyone at the marathon was contagious.  At mile 20, I was a hurtin unit, I got some tape from the medical tent and had my knee taped up...good ol' IT Band Syndrome was kickin in.  Then there was the Nike+ Powersong Zone which helped me soo much!! 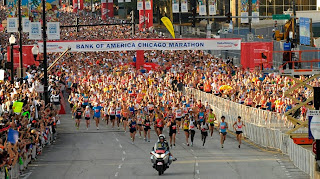 Nike had this huge tunnel with big flatscreens, I could see myself running (not that I really wanted to at mile 20), but it was neat.  The song was "I Got a Feeling" by the Black Eyed Peas...great running song.  At Mile 24,  I talked to two other runners from Chicago who had been doing the marathon since they were young and volunteering at it since a young age.  Some random guys had beers and jello shots that they were giving out to runners.  The girls and I opted for the jello shots, hey we only had 2 miles left to go and we weren't going to be setting any world records.  Damn, those jello shots were good and exactly what we needed.  I vaguely remember the last mile, I just remember that my body was in shock and tears of happiness started to stream down my face.  When I finished, my mom and aunts found me after being so concerned about my whereabouts while I was running.  Then I went back to the hotel room and crashed.  I didn't want food or a shower, I just wanted to sleep.
Posted by Elizabeth at 10:09 AM