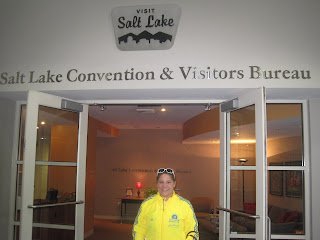 I flew into Salt Lake City the day before the marathon with my mom and we walked around the city....went to Temple Square and the expo to get my bib #. 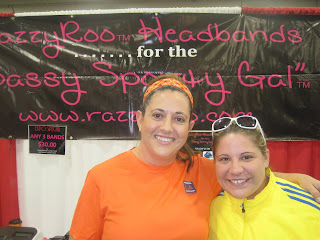 I finally met Cheryl from RazzyRoo Headbands.  She is a sweetheart and her headbands are soo adorable and awesome for running!
Temple Square in Salt Lake was beautiful. 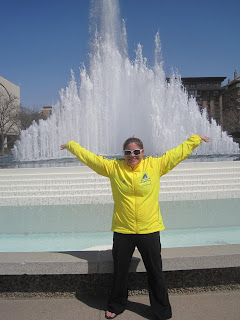 My mom and I went up to the 26th floor observatory of the LDS Office Building.  It was beautiful to see the entire Salt Lake City Valley. 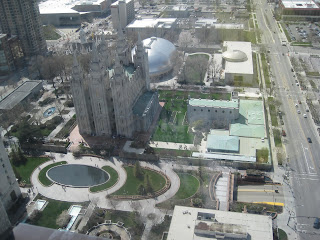 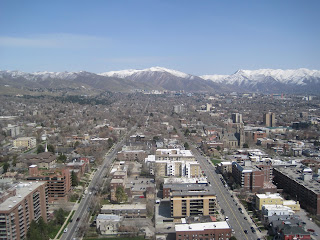 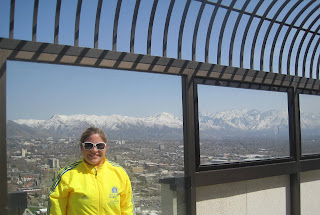 On the morning of the race it was raining and it was pretty cold at the Olympic Legacy Bridge (Univ of Utah) where the starting line was.  I met a bunch of marathon maniacs at the start which was awesome because it was my first marathon as an official maniac! 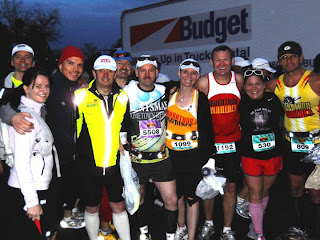 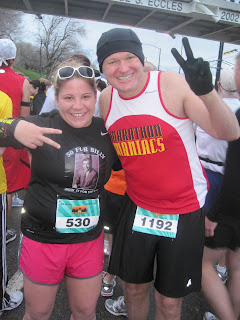 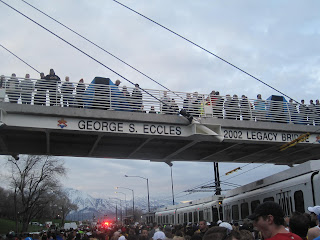 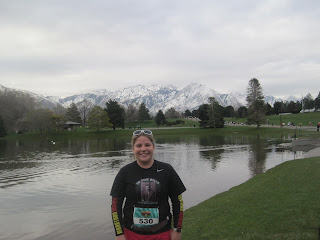 The course was beautiful because of the mountains.  I could definitely feel the change in elevation.  I met a man named Doug around mile 11 and stayed with him for the rest of the marathon.  Doug was from Cottonwood Heights, outside of Salt Lake.  He began running at age 59 and ran his 1st marathon only two years ago.  He started running because his daughter told him he couldn't run a mile.  He ran eight blocks one day and then decided to run a marathon!  Doug was diabetic and took his blood sugar while running.  I gave him a lot of credit for being able to run marathons even with such low energy.  I finished with Doug and he thanked me at the end for staying with him.  He PR'd by 25 minutes. Salt Lake City was his second marathon.  Once I started to run with Doug, I knew I was going to stay with him.  I helped him finish at his desired goal time and he cut off 25 minutes from his first marathon time!  A definite success.
Before Mile 20, there was a "Temptation Station" with shots!  I didn't take any, but it was pretty amazing.  Some residents set up tables with shots of whiskey and blasted music....and they even kept a "Tempted Tally." 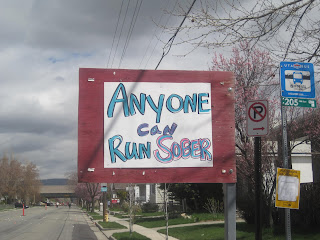 After the marathon, my mom and I went out to lunch with my college xc & track friend, Sarah for lunch!  It was so awesome to see Sarah out at mile 14 and then at the end of the marathon.  Sarah lives in Cottonwood Heights now. It was really nice to catch up after a couple of years.
Later that night, my mom and I met up with Nicole and Jeff from Wisconsin.  Nicole is also aiming to run 50 marathon in 50 states.  We went to a bar called the Tavernacle (making fun of the Tabernacle) Social Club.  It was a fun time, minus the fact that the beer was only 3.2% because of Utah liquor laws. 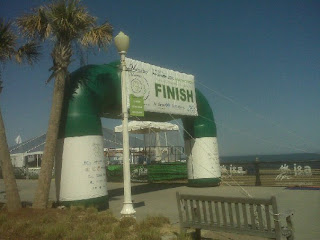 The night before I left for Virginia, a college track friend (Kasey) texted me "I'm going to Virginia too..." we then realized we were on the same flight.  We had a fun layover and drank a couple green beers together! The last time we saw each other was around 2006, we were SO excited!!
I quickly settled into the Holiday Inn Oceanside on 21st Street and Atlantic Avenue...then I did a phone interview with Suzanne at WBZ Radio in Boston about 50 for Billy.

I was able to do some exploring on Virginia Beach the day before the race, but not a whole lot because I had to write a memorandum for class.  However, I did take a break to have lunch with Charlene (@OneFootThere) from Philly.  I briefly met Charlene at the Philly Marathon in 2010.  She ran the 1/2 at VA Beach this past weekend and will be running the Marine Corp Marathon!

After lunch, I walked the Boardwalk and checked out the finish line.  It was beautiful outside and the weather was perfect for running (50s and cool along the ocean).  I love running near the ocean!  The night before the marathon there was a beautiful full moon right over the ocean.  Its reflection made the water sparkle.  I sat on my hotel room balcony and smiled.  I felt like my dad was sitting right next to me and we were sharing a laugh.  So far throughout this whole journey, I have felt like my dad hasn't been gone.  It feels like I am sharing all of these miles with him. 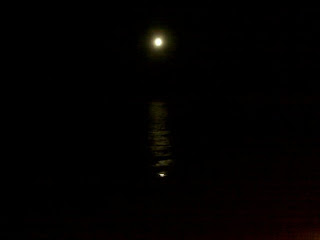 On the morning of the race, I opened the glass door to the balcony and saw lots of 1/2 marathoners heading to the start area.  I could also see the finish area from my balcony which made me even more excited.

I woke up to a beautiful sun rise.  Dad was with me.  He wouldn't leave his little Bethy behind. 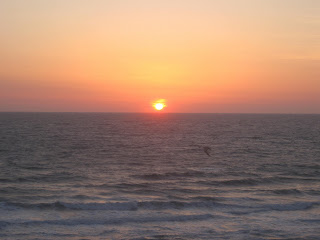 It was so windy at the start line on Atlantic Avenue!  I joined a bunch of other marathoners in a garage to stay warm.  I met Pam from New Orleans, who is a 50 stater. Shamrock was #29 for her and she was aiming for 3:30.  She was very friendly and hopefully our paths will cross again.  The race was delayed 15 minutes and at first people were a bit disappointed, but I think it was a good thing.  I am not sure that I would have met Pam or had the opportunity to bond with a bunch of other runners in a small little garage area of a random building.

And then we were off!! I met Jamie from North Carolina at mile 1 and ran with her until mile 23.  She had a shirt on that said "every step is for Ben." I asked her about her shirt and she said Ben was one of her preschool students who was diagnosed with juvenile diabetes.  She was running for him and raised $1,800! Ben was at the finish line with his family waiting for Jamie. It was Jamie's first marathon and I have a good feeling she will do many more.  We had a lot of fun during the marathon, we took lots of pictures, had our picture taken with Army boys, danced to "Gettin' Jiggy Wit It", sang songs, and laughed a lot.

Right before the 1/2, a runner said to me, "Hey weren't you just at Myrtle Beach for the marathon?" and then I made the connection...It was Bill, a 50 stater I had met at the starting line at Myrtle Beach.  I ran with him for a while, it was so awesome to talk to him about different marathons.  Shamrock was #78 for him.  He is going to do the 50 again.  I told him his quote "Pain is expected, injury is optional" made my blog and of course he gave me about 3 more quotes, but I can't seem to remember them!  He told me he is running the Kentucky Derby Marathon too so I will be seeing him there! I am sure he'll have some quotes for me then! 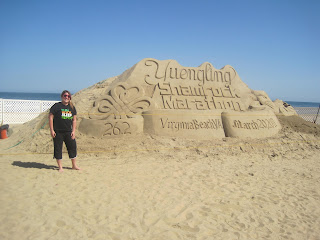 At mile 20, there was a black and white lighthouse near Fort Story.  I had never seen one like this before! 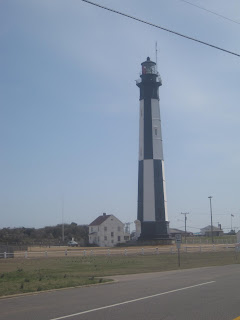 I took off at mile 23, my legs felt good and I was ready to check VA off the list.  I didn't even realize until I made it home that the Shamrock Marathon made me a Marathon Maniac! I am now #3632!

Thank you to everyone for all of your support.  I am having a lot of fun with this journey and I know there will be many more awesome memories.  I am off to Salt Lake City next  for the SLC Marathon.  My mom is coming with me since she is on April vacation (she's a teacher).  I can't wait! :)  Please support me by making a donation to the Center for Grieving Children.  Every bit helps, even if it's $1, $5, $10. Donate here!
All of the proceeds go directly to the Center which is a non-profit driven by volunteers.  I went to the Center when I lost my dad suddenly in '06.  They offer free support groups to people of all ages.  Check out their newsletter with a feature on "50 for Billy."  Center for Grieving Children Spring 2011 Newsletter